The Curse of the Penthouse

Soon after this highly successful couple and their two young daughters moved into their $10,000,000+ Manhattan penthouse condo, both children began experiencing cough and wheeze symptoms at night. At first, their parents and pediatrician believed these were probably cold and flu symptoms, but the girls were not responding to medication. Several months later, after visiting with a number of allergy and pulmonary specialists, both girls were diagnosed with asthma. The parents were convinced that the association between their family’s occupancy of the penthouse and the onset of the girls’ symptoms seemed like more than just a co-incidence, and when their girls’ symptoms improved markedly during the family’s summer vacation in the Hamptons, they made a decision not to re-occupy the apartment when they returned in late August for the start of the new school year. At the parent’s request, the building’s property manager arranged to have the apartment inspected by a reputable environmental consultant, who found that rainwater had been seeping into the apartment beneath the wood floors adjacent to the terrace door. A small amount of the flooring was subsequently removed by a mold remediation contractor, after which the environmental consultant re-inspected and declared the apartment to be free of mold and suitable for re-occupancy.

The parents wanted an independent confirmation that the apartment could be safely re-occupied, and engaged Microecologies to conduct an investigation.

What we found was appalling! The so-called environmental expert engaged by the property manager must have been wearing blinders – during both of his inspections – because he identified only the most obvious conditions – those for which no special expertise would be required. By using our knowledge and experience, we were able to accurately deduce where hidden water damage and mold growth conditions were likely to be lurking – on both sides of the plywood sub-flooring and on the sheetrock in the wall cavities along the perimeter walls throughout the apartment (see photos). As is our policy, these conditions were documented with electronic photography and laboratory analysis – because almost inevitably, these types of disparate findings by environmental consultants are at the center of a legal battle involving both financial issues (in this case over responsibility for $500,000+ in remediation and repair bills, monthly maintenance bills, and legal fees) and personal injury issues.

At this time, the dispute is still unresolved. The family has not re-occupied the apartment and the girls’ respiratory symptoms have substantially resolved. Microecologies represents the plaintiffs as expert witness in ongoing litigation. We want our readers to know that the 2009 World Health Organization (WHO) report Guidelines for Indoor Air Quality: Dampness and Mold concluded that there is sufficient evidence of association between exposure to indoor dampness (visible mold/water damage, measureable moisture, mold odor) and both the development and exacerbation of asthma, and subsequent authoritative epidemiological studies have found sufficient evidence of a causal relationship between indoor dampness and the onset of asthma in children. 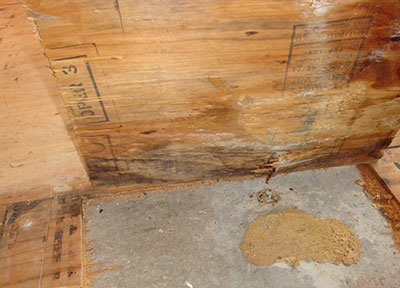 Photo #1 showing visible mold growth on the bottom side of plywood sub-floorboards in this penthouse condo. 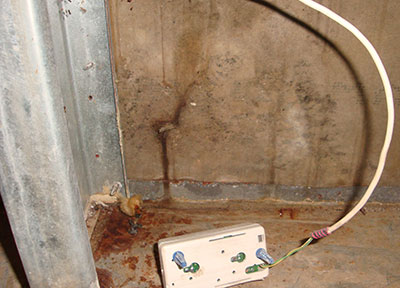